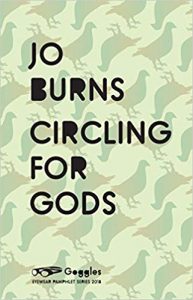 The 21 poems in this prizewinning début pamphlet introduce the powerful voice of a poet whose breadth and depth of vision explores complexities of individual, social and global significance. The key to navigating this poetic journey can be found in the title, which signals ever-widening circles of experience, starting with the intimate core of home and family, expanding to geographical wanderings through many countries and cultures, towards maturity and finally, transcendence.

Within these interlocking journeys, many of these poems challenge the reader to look beyond surfaces. The first poem, The Mid-Ulster Machinery Museum, imbues everyday rituals of family and life that usually evoke safety and joy – birthday presents, Hallowe’en games, school and later, nights out on the town – with menace from a hostile environment: threatening phone calls, lifts home from the disco by parents careful to drive safe padded cars, in the streets

the Chinook slicing soundtrack on the walk to the disco
or tabbing soldiers outside my bedroom window,
segregation in school and even in poetry:
No Heaney (in name or book) was known to me yet.

For, this is the circle of family and community of a young Protestant from Northern Ireland at the height of the Troubles. The local bus-station is bombed. The car of a family friend appears on the evening news. Yet young life goes on – cocktails, nightclubs, Eastenders on TV. This poem is a daring opening, all the more powerful for being the starting point from which the poet travels, and leads us, a great distance, not only geographically, but in a declared passion for tolerance and a refusal to dance with dogma. In On Faith the poet pleads, or warns,
Don’t set me modern Abraham tests.

A child for a word, an eye for an eye. My God, a mother,
a mountain, cries ‘No more martyrs. Punch the stained glass out.’

In these 21 poems, there is a complex intertwining of the personal, the social and political, with a sense of the individual self gradually opening to the vastness of the world it touches and changes, and by which it is in turn changed. This interplay is most beautifully achieved in the poems that foreground love – of family, of a lover and especially, arising from the elemental and seismic changes wrought by motherhood. A journey through the Andes coincides with Conception, and the wonders of a first scan are as marvellous, or more, than the majesty of the mountains:
In a flash
like night sky, inside out;
her womb inverting around
this new star forever.

Many of these are womanly poems, in the most powerful and robust sense of that word, where motherhood and the poet’s exploration of the changes, joys and fears of parenthood, lead her to sober reflections on the human condition and the world which the children will inherit. Going beyond simple rejection of intolerance, Places Your Children Should Never laments the victims of atrocities and war – Dunblane, Chernobyl, Aleppo – and yearns to protect them from

Places where you will always be inexorably wrong…
… Climb back. Curl softly into my womb.

Amongst these poems are other personal reflections of great tenderness: memories of a beloved uncle, a lover of bees, whose mind had long turned to honey; musings on ancestral origins sparked by browsing through Family Relics; the labyrinth of language and communication in the delightful love poem Untranslatables.

Towards the end, the collection circles back to the opening theme of the Troubles – but this time, illuminated by a note of reconciliation. The remarkable Piano (After the Forte), an elegy to Martin McGuinness, does not shy from recalling how, in the early days,
cacophony reigned in splittered tones
and concludes
we’ve the right to be judged
by our last fermata and al fine note.

It is perhaps not surprising that Circling for Gods ends on a contemplative note. The final poem, Texere Noctem, is a lullaby that celebrates how
In brilliance, new threads
of possibility sing.
My personal favourite is the penultimate poem, Green Milk, a meditation on the experience of climbing the Himalayas and achieving a state of consciousness to which the poet can return, a pantheistic transcendence that eschews dogma in favour of the intense, immediate experience of living:
Reverence, for the first time in my life, feels right…

…the hills bursting streams are kaleidoscopic.
If there must be religion, then let this be it.

This is a stunningly accomplished book by a poet fully in command of her craft and engaged with the personal, social and political concerns of our day. It is also a brave one, for some of these poems offer perspectives on certain topics that are often avoided – on religion, faith and especially, on the North. For these reasons, Circling for Gods is not only an excellent book, but also, an important one.