This week I had the privilege of hearing a single from Keith Burke’s new album, his fourth since he
emerged onto the music scene with his 2004 album, The Dancer Who Stole Your Shoes, a Hot Press
‘pick of the fortnight’. Burke, who hails from Skerries in North County Dublin, is one of Ireland’s
most versatile musicians, having released three previous albums and toured the third, These Boys, on
three continents during 2016. 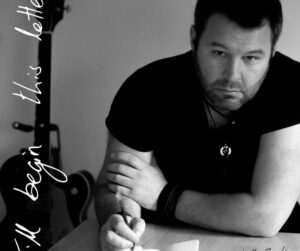 This new album, produced by Anthony Gibney, has fourteen songs, all words and music penned by singer-songwriter Burke himself. It had a complicated, prolonged, genesis. Production began in Milan in 2019 and was scheduled for completion in Dublin in 2020 but got derailed for two-and-a-half-years
because of you-know-what. Work was finally completed in Dublin and Kildare earlier this year and this single will be released on September 9th .
From the opening bars, I’ll Begin this Letter With Your Name invites us into an emotional landscape that is both familiar and mysterious, an enticing paradox evoked in both the words and the music. The smoky harmonica and bluesy, Dylan-esque vibe of the introduction sets a tone that is melancholy yet
somehow uplifting, as the rhythm and instrumentals veer between acoustic intimacy and a gathering intensity. The beautifully wrought lyrics muse on past mistakes, missed opportunities, yearnings for what might have been, all to be summed up in this letter. Is it a letter of apology, regret, hope or all of the above? The mystery is satisfyingly allusive, as the instrumentals fade to an acoustic, folky mood that reveal the mellow tones of Burke’s voice, just a man with a guitar like the singer-songwriters of old, until the hint of bass and the drums thrum their insistent heartbeat and the surprise crescendo allows an effortless display of Burke’s impressive vocal range, drums, bass, piano returning to sustain the heart pulse of the song.                                                                                       I’ll Begin This Letter With Your Name ends on a tone of restrained yearning backed with a complex yet gentle instrumental that finally yields to the strains of that gorgeous, moody harmonica. This is an elegy to love, or loves, gone wrong, the whys and hows we do not know, for there is a mystery at its heart, as there is in all the best love songs. Listen to it.

This site uses Akismet to reduce spam. Learn how your comment data is processed.