Fiona Perry was born and brought up in Northern Ireland and has lived in England, Australia, and New Zealand. She is both an accomplished writer of modern poetry and fiction.  Her short story, ‘Sea Change’ won first prize in the Bath Flash Fiction Award in 2020 and her short fiction was shortlisted for the Australian Morrison Mentoring Prize in both 2014 and 2015. She was a contributor to the Label Lit project for National Poetry Day (Ireland) 2019. A graduate of Queen’s University, Belfast and Lancaster University, she has worked as an environmentalist, teacher and editor and lives with her family near Oxford.

Alchemy is Fiona’s début collection, a skilful and beguiling work of modern poetry, published by Turas Press in October, 2020.Turas Press is proud to announce that this stunning collection was runner-up in the 2021 Poetry Book Awards 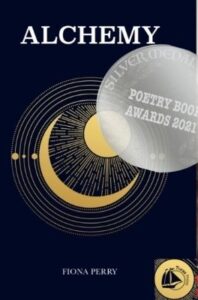 Fiona’s readers have responded to the varying strands of her work with high praise:

“Perry uses words with such mastery, stacking beneath them story, emotion, and truth in abundance. I came back to the poems again and again, and there was always more to find.”    Fiona Sussman

“A gifted raconteur, Fiona Perry beguiles with whimsical and vibrantly-etched narratives in her spellbinding début poetry collection. Skilfully interweaving sensuous imagery, wry humour and poignant retrospection, Perry dazzles with dalliances into the mythical, and her own vividly-imagined other worlds. Populated by a variety of animal totems, alongside ‘dangerously sexy women’, Perry’s richly-hued alternative universe abounds with magical transformations. This is a place where fish dream of being trees, bodies are clouds, her lost father is a missing child in his father’s house and grief is a puddle of wax in a kitchen shrine. Poignant, witty – at times, raucously feminist – and bewitchingly inventive. This first collection is a heady elixir of sublime poetry and captivating story-telling.” Anne Casey

“Perry’s sumptuous collection shifts through memory, family and nature with consummate ease, journeying through vivid landscapes whilst describing in unflinching detail formative events and places. ‘Intensive Care’ is just one of many moving poems that showcase her talent in this regard. Perry makes use of a menagerie of animals such as wolves and panthers to render her poems whilst also drawing upon spiritual and historical sources to create these revealing pieces, all delivered in her unique, eloquent and fearless voice.”  Glen Wilson

“Alchemy touches on several themes, such as heritage and the awe of nature, but resonating most loudly is a celebration of femininity in spite of a world that too often strives to dampen it. Fiona Perry writes with fluid grace and wavelike beauty, mirroring the oceanic imagery in many of the poems, imagery that is always striking and original.”  Philip Elliott “Evocative imagery and a distinctive voice are hallmarks of this vivid and multifaceted collection. Perry conducts an impressive sense of scope throughout, conflating the mythological with the domestic, taking the reader on journeys to places exotic and those closer to home. Perry deftly weaves moments of both poignancy and humour, balancing empathy and a sense of play in a manner that transforms everyday objects into artefacts imbued with magic, inviting us to look at them afresh. A beguiling and rewarding collection that demands repeated readings.”

“Some of these poems reside in the tree shadows, some at beaches, some in the sky, and all have a culture of their own – each ‘a miniature universe’ spanning lifetimes.”

Dr Beatriz Copello commented on the craft evident in Perry’s work, in the December 2020 issue of the online journal,  Compulsive Reader:

“Whether the poems in this collection are about domestic life, an imaginary life, fantasy or reality they have been penned with elegance and precision.”

John Bartlett, who reviewed Alchemy for the December 2020 issue of the literary magazine The Blue Nib, said

“Alchemy is a well-named collection, carrying the idea of a transmission of base metals into gold, the idea of a semi-magical process of creation connecting the reader into unexpected and alternate worlds…This is a collection to be savoured and reread, giving us hope that base worlds can indeed be transformed into something beautiful and mystical.”

Video: To mark the release of Alchemy, a multi-media video montage was prepared by Jack Kane. This video,  Celebrating Fiona Perry’s Alchemy,  which is on the Turas Press YouTube channel, shows Fiona and friends reading from, and reflecting on, her work.

Author’s article: In an article published in the October 2020 issue of  writing.ie, Fiona recalls the beginnings of her writing journey in creating this engaging modern poetry, and reflects on her way of working and the impetus behind her poems.