Róisín Tierney was born in Dublin and studied Psychology and Philosophy at University College Dublin. She lived in Spain for several years (Valladolid and Granada) and is now based in London. She has worked in many areas, from theatrical make-up artist to museum administrator. 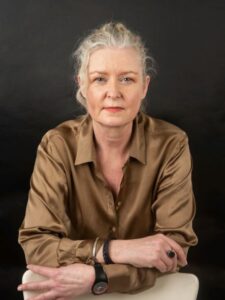 Róisín’s début collection, The Spanish-Italian Border was published by Arc in 2014.

Róisín’s poetry has won prizes in many national competitions including the Strokestown, the Brendan Kennelly, the Bridport and the Winchester Poetry Prize, and her pamphlet Dream Endings (Rack Press 2011) won the prestigious Michael Marks Award.

In addition, several of Róisín’s poems were shortlisted or highly commended in other significant competitions, including the Forward Prize, TLS Poetry Competition, Oxfam Literature Festival.

Róisín was Poet in Residence at Hawthornden Castle, Scotland in September 2018 and also in July 2012, at the Harvard Summer School, Centre for Hellenic Studies, Nafplion, Greece.

The Chair of Judges of the 2012 Michael Marks Award, Alan Jenkins, said of her pamphlet Dream Endings:

“Róisín Tierney’s subjects may be the dark ones of human vulnerability and anguish, but the poems in this wonderfully cohesive and well-organized sequence rest on solid and graceful foundations of precision, musicality and wit. A remarkable solo debut from this already much-noticed poet.”

“..the joy of language is put in service of describing minute and uncanny detail.” 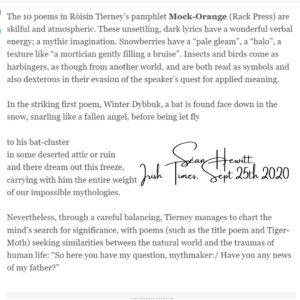 Sarah Howe, judge of the Winchester Poetry Prize, noted that

“… Sacred Heart is the work of a seasoned storyteller with a rich, descriptive eye and a knack for conjuring the slippages of time. Overlaying past and present, the poem inhabits its couplets with consummate skill, dancing down the page to its striking conclusion.”

Róisín’s poetry has twice been reviewed in The Irish Times.

To learn more about Róisín and her work, visit her website