Ross Hattaway is a New Zealand-born writer, born in Wellington, and has been living in Ireland since 1990. He has published four collections of poetry: 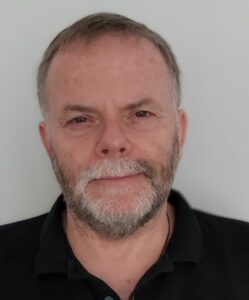 Ross’s work is widely known for the wit and wisdom evoked in his playful, pared-back style, full of humour and puns, yet compassionate and profound. His poems have been published widely, and he has performed his poetry in Ireland, the UK, the USA, Australia, New Zealand and Lithuania. His work has been translated into Russian.

In her review of How to Sleep with Strangers in Poetry Ireland Review Issue 127, Julie Morrissey  highlighted the wry wit and wisdom of his work, noting how this collection

“…draws together sometimes disparate influences, including a series of tanka, odes to the Paua (Maori sea snails), poems about Christian practices and confessional and lyrical poems…his wry humour comes through in poems such as ‘Shopping’…at times, reading this collection was akin to waking up in new surroundings, a slightly disorientating experience, but one with enough intrigue to continue exploring.”

Colin Dardis reviewed How to Sleep with Strangers in Lagan Online, September 2017:

” Strangers is an examination of parameters and possibilities. It explores spaces, concrete and metaphysical, easily moving between the natural and the man-made…[it] will leave you will a curiously angry smile on your face as Hattaway chooses to answer life with whimsy in places, but bemoans the certitude of heartache as well.”

” How to Sleep with Strangers is a mix of obliquity both alarming and reassuring – like the idea of fate. These poems play and pun, and sometimes come close and whisper something terribly sad and shocking in your ear.”

“Well, yes. . . Ross Hattaway has always been one of those old-school Romantics who covers his tracks by talking out the side of his mouth. And he can be brilliantly laconic: think Raymond Chandler or Humphrey Bogart. But in these poems he’s far more than a bunch of wise-cracks and off-hand noises. Get ready for a clear gaze. A good ear. A fully human heart.”

Liam Murphy, in his review of Strangers for The Munster Express (21st July, 2020) praised the accessibly of style that deals with profound and wide-ranging themes:

“Ross Hattaway has a quirky, humourous style that is refreshing…Get this book and make a stranger a friend.”

In 2022, Liam followed up with an engaging review of Ross’s new collection, Plain, in the Munster Express, published on July 5th:

“A literary observer, a witty witness of his own foibles and the quirkiness of others in his orbit.”

How to Sleep With Strangers and Plain are available from our online shop and from independent bookstores.